I reside in Riverside Terrace, a long established, quiet rural residential area
that will abut the National Government’s proposed development of a 1000 +
new gap housing units between the Main road down to the banks of the Disa
River.
The proposed development will impact not only the Riverside Terrace
residents but Hout Bay as a whole too and must not be allowed to “come
through the back door” as it currently seems to be.
I have kept regular contact with the owners of Benlo Farm; in an effort to
better understand what is currently being planned right on my doorstep.
It would appear that most residents of Hout Bay have little to no knowledge
of this low cost housing development being planned for construction in our
town.
I can confirm that the owners of Benlo Farm have been approached by
National Government whose intentions are to acquire their land, and most
likely the 3 other’s adjacent to it in order to develop GAP housing.
I can only assume that whatever form the gap housing design takes, it will
be maximum density as such a development would require EIA, Zoning,
traffic impact assessment, Heritage clearance etc. to be undertaken and
submitted to the City of Cape Town as part of any application to change the
current rural zoning. Such reports take time, are costly, and will involve
public participation. 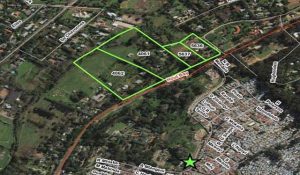 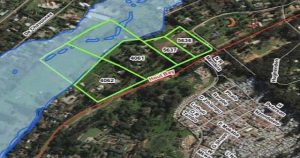 The owners of Benlo farm have been told that if they are unwilling to sell,
the farm will be expropriated.
The 4 erven earmarked, by national government, for development are
opposite the current informal settlement. Assuming this proposed housing
project goes ahead, it is highly likely that the township will effectively spread
across the main road right down to the Disa River.
The plans for this large tract of Hout Bay land are all in line with the
government’s current intention to provide high-density housing as part of
their current Urban Densification program. I have heard that it is the
government’s intention to make this particular Gap housing initiative a role
model to be implemented countrywide.
It would appear that Provincial and National Government support this
particular housing project. Senior DA management has confirmed the
intention to acquire Benlo farm for low cost housing.
To date no formal offers for the land appears to have been made, but I can
confirm as fact that Government appointed engineers were on the various
sites yesterday (Thursday2nd November), gathering information needed in
preparation for an EIA (Environmental Impact Study) which would have to
be submitted as part of the planning application in this regard. This is the
norm for all such projects in the province, private or otherwise. I do hope it
applies to Government applications too!
The government appointed engineers etc has to have their various reports
submitted by November the 22nd
An excavator was on site November the 2nd, to open large holes in several
areas on erfs 4061, 5636 and 5637 to test for ground stability etc. It would
appear that the “dumping” of rubble and other fill material that has taken
place on erf 5636 and 5637 over the past few years, has rendered the
resultant lower terrace unsuitable for 4 story buildings, the upper section
close to the Main Road seemingly does have stable enough soil to enable 4
story blocks of flats to be built.
I have not seen any engineers report and the above information has been
gathered by talking to the men carrying out the various test, and therefore I
do not pretend to post this as fact.
The picture below shows the extent of the area available should the
abovementioned farms be consolidated. It also shows where this land lies in
relation to the existing township which is currently expanding with the
creation of more Gap and RDP housing. 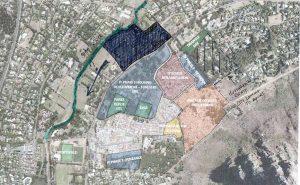 There is a further shaded area to the top right of my picture, below the
green triangle TRA. This is Hughenden Estate. This is an area of 19 or so
established homes, where all owners have been approached by the City of
Cape Town who wish to purchase these. I can only speculate that this will be
for further township expansion and if acquired, this established residential
area would be destroyed to make way for more low cost housing.
The City’s current plans within IY and DY are as follows: 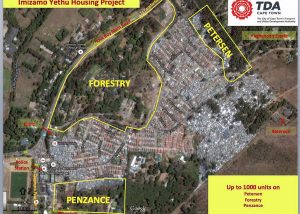 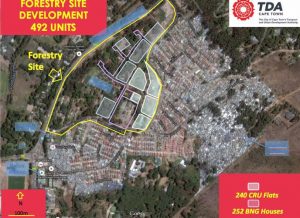 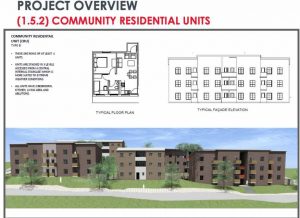 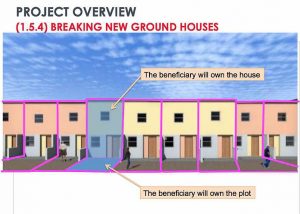 The Community Residential Units (CRU):
Blocks of flats, set in rows of at least 4 units. Last seen plan was for three
story high buildings consisting of 2 bedrooms , 1 bathroom and an open plan
kitchen/living area.
To qualify for a unit the applicant:
May have owned property before,
May have an income between R3,500 and R10,000.
May be younger than 40.
The Breaking New ground housing (BNG):
These will be 43m2.
Beneficiary will own the house and the land it sits on.
To qualify for a unit the applicant:
Be a South African citizen or have a permanent residence permit.
Be older than 40.
Be married, have a permanent partner, or be single with dependents.
Not earn more than R3500/month.
Not have received a government subsidy before.
Not have owned a property in SA before.
Will bw required to submit proof of income: recent payslip/ UIF/ or provide
an affidavit

From the City’s power point presentation dated the 4th February 2017 (full
article available) the plans are for 240 CRU flats and 252 BNG houses on the
forestry site alone.
Subsequently it would appear that the Parks department have been moved
off their site within the Forestry section (outlined in Yellow p4) making
available another 14,000m2 (?) of land for development.
Further building is planned for Peterson, bordering Hughenden Estate, and
another site bordering Penzance. It is my understanding that on the 3
combined sites there is planned at least 1000 more units, over and above
the existing permanent structures within the township itself.
There are roads, electrical connections, ablution facilities etc planned within
the township. To implement this necessitates the act of “super blocking”
which has been opposed by some sectors of the IY community, as it will
require structures already on these areas to be removed to make way for
the roads and services. These displaced families will be housed in what is
known as TRA – Temporary Relocation Areas, such as the Triangle site.
The public open space behind the Cemetery on Main Road, known as the
“Triangle” was recently identified as a suitable area for being used as a TRA.
Under the umbrella of “Emergency Housing” Patricia de Lille made an
application to rezone this land to accommodate over 200 shacks. Before the
consultation period was even over the City of Cape Town sent in the tree
surgeons and felled the trees. The earth moving equipment is now on site
and the interested and affected parties have not had a chance to be heard.
The result of the application has not yet been made as far as I am aware,
and with the ground preparations underway, it would appear that planning
rules are not being followed here. 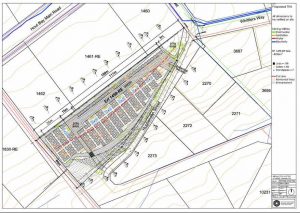 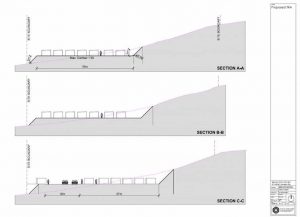 As can be clearly seen the City will undertake major earth works in order to
make the triangle (erf 1459) fit for purpose.
The land (erf 1459 Triangle) being “fit for purpose” can be argued, but no
one appears to listen.
• The access to the site is off the narrow slip road within Hughenden Estate.
• It is a known bog site and with the removal of the trees will exacerbate this problem.
• The site is prone to severe run off during rains: 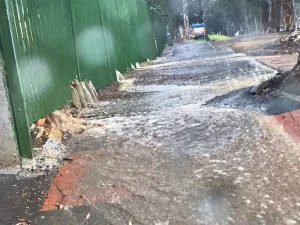 • There is raw sewerage running out of Dontse Yakhe (DY) above the
triangle and this runoff flows onto the site and enters the storm water
system and further pollutes the Disa River. (There are articles written
about the environmental impact the informal settlement of DY has on
the eco system of the Disa River readily available by simple internet
search on DY) Picture below is raw sewerage running out in the corner
of the cemetery. 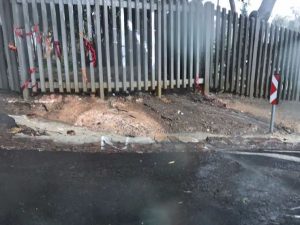 • No traffic impact seems to have been done regarding the access for
this site. Main road is heavily congested and access from Hughenden
and Riverside Terrace on to it is dangerous. Now add taxis to the mix
at this busy intersection!
I could go on but I am sure you all see the picture. The time scale for a
TRA is a 90 days for such use followed by another 90 days, so it can
ONLY be used for this purpose for a maximum of 180 days, but there
again an application could be made to make this a permanent extension
of the township!
The cost of clearing and leveling this land will be substantial and would
seem a waste of money if the site were only to be used for 180 days.
There was another application to acquire a Unesco Heritage (yellow
shading top left next page) site above Hughenden estate and abutting DY
for further township expansion, I am unsure if this is still being
considered. The map of the township expansion may very well look like
the one below, even bigger if Hughenden is acquired: 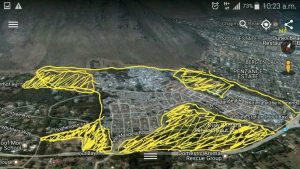 If Benlo, Helsby and 1a Riverside is indeed purchased by national
government, as now seems a foregone conclusion, the Hout Bay Township
will cross the road and soon border the Disa River directly.
Bonginkosi Madikizela confirmed yesterday by sms, when questioned about
the possibility of land invasion should National government purchase the 20
acre (80,000 m2: 1A Riverside Terrace, Benlo and Helsby farms) his
response was that: the land would be secured and they would not allow
anyone to set up home there.
Consider this, if the land were indeed acquired by national government for
gap housing, a public participation process prior to the commencement of
building would ordinarily occur. Normally an application for rezoning etc
would take years and be nigh impossible to achieve. Being state owned land
I dare say things would be different in terms of success in such an
application.
I foresee that at this point more Hout Bay residents may finally sit up and
take notice, but now it’s a “shutting the door after the horse has bolted
scenario!” and all that is likely to be achieved is a delay in the inevitable,
and that in it self poses problems:
The land will sit fallow for a number of years, during this process, so how will
the City of Cape Town ever manage to keep township residents off this large
tract of land once it is common knowledge it has been acquired to be used
for housing for them? How will this be policed? What’s to stop shacks being
erected right down to the banks of the Disa with easy access to Valley road
properties from here? All it takes is 48hrs and squatter’s rights have been
obtained, DY is a testament to the City’s success in removing illegal
squatters having taken up residence on what was a UNESCO World Heritage
Site!!

Wake up Hout Bay, we are facing a potential disaster to our bay, not to
mention the Disa River. Time to act, and fast!
Lastly, I do understand and accept there is a desperate need for low cost
housing through out the province, and fighting against urban densification is
both futile and counter productive, however this process needs be
undertaken sustainably and be inclusive of all residents. Right now I feel
that Hout Bay seems to have been identified as an area of least resistance,
and little regard given to its existing high density, and from the plans I have
seen there are no new schools, clinics etc, in the pipeline, what about
employment? Etc etc etc?